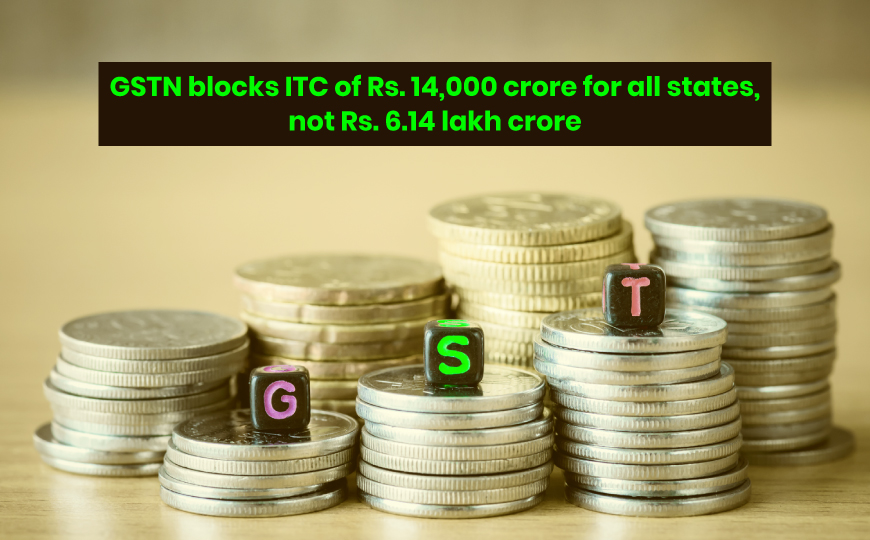 According to the Union Ministry of Finance, during September 2021, revenues collected for Goods and Services Tax (GST) touched a 5-month high at Rs. 1.17 lakh crore.

The Goods and Service Tax Network (GSTN) said that it has blocked Rs. 14,000 crore is worth of Input Tax Credit (ITC) of around 66,000 businesses registered under GST.  Responding to the social media posts based on an RTI reply, about 6.14 lakh crore of ITC blocked under rule 86A of the GST laws, the GSTN has tweeted that this figure includes erroneous data entries made by the taxpayers.

The GST paid on the purchase of any goods or services is available for claim right away must be set off with the liability on sales on a self-assessment basis in the GST returns. The GST commissioner has the right or power to block ITC availed even before any legal action can be taken against such disputable ITC.

And, according to the right figures, ITC of approximate Rs. 14,000 crore involving 66,000 taxpayers is blocked as of the date which is only 0.38% of the average ITC utilized by all the taxpayers in any financial year.

There was an RTI (Right to Information) application filed on 31st August 2021 under the RTI act, 2005 by a fellow chartered accountant based in Raipur, CA Madhur Aggarwal. He sought specific data points on blocking the input tax credit available for utilization in the electronic credit ledger of taxpayers under the CGST rule 86A.

Responding to his application, Mr. S Mohan, CPIO at the GSTN provided the necessary information through a letter dated 5th October 2021.  According to the application filed, the first and second questions were on the state-wise breakup, and the total of ITC blocked under CGST Rule 86 as of 31st July 2021. To these questions, GSTN provided an annexure with a state-wise breakup and the total figure of taxes on it.

In this annexure, Delhi has topped the list of the highest taxpayers whose ITC got blocked. Additionally, UP recorded the highest value of ITC blocked at Rs. 5.82 lakh crore. ITC blocked for all states cumulatively came up as Rs. 6.14 lakh crore. Later, this figure was negated by GSTN stating that this figure included blocking due to errors in data entries by the taxpayers, and it has come up as 14,000 crore.

The third and fourth questions sought the value of ITC respectively blocked and unblocked, older by one year from the date of such blocking. To these questions, GSTN responded with Rs. 2.96 lakh crores and Rs. 1371 crore respectively.

The government had introduced Rule 86A in GST rules in December 2019, giving powers to the taxmen to block the ITC available in the electronic/digital ledger of the taxpayer if the officer has any “reasons to believe” that the ITC was availed fraudulently.

Such blocking is valid up to one year from the date of such blocking. However, any notice or proceedings can be initiated against the taxpayer in the meantime. If any notice is issued, the ITC earlier blocked must be unblocked as a legal course will take over the issue. However, if the notice was not issued during that one year, the ITC must be unconditionally unblocked.

According to the latest update, there are 1.32 crore taxpayers in India registered under GST.

If you are thinking of going for online GST registration, or want to know about the benefits of GST, or anything else related to GST registration, Credence Corporate Solutions will definitely help you with that.