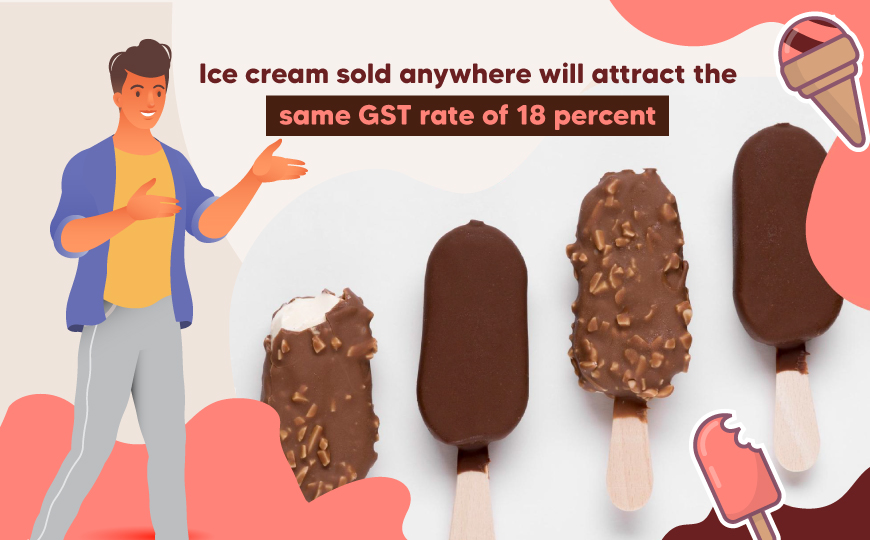 The GST Council (Goods and Services Tax Council) is a governmental body entrusted with regulating and directing all aspects of the country's application of the goods and services tax, including tax rates and other implementation procedures. The Council meets regularly to increase the overall GST rates for a variety of commodities.

Earlier, the authorities ruled that ice cream supplied in ice cream parlors falls under the category of restaurant services (except when sold in bulk orders) and hence attracted a GST rate of 5% (without ITC). During that time ice creams sold outside were subjected to 18% tax.

Since the implementation of GST, the GST rates on various commodities have changed. The rate changes are implemented through amending notices that are delivered regularly by the government.

A Ministry of Finance directive to tax officers informs that ice cream parlors do not cook or prepare ice cream for consumption in the manner of a restaurant. They instead sell previously prepared ice cream. The ice cream is supplied as a product rather than as a service, even if the supply contains some service ingredients. Accordingly, ice-cream supplied by a parlor or other similar business will be subject to GST at the rate of 18%, it said.

Ice cream parlors supply is treated differently than restaurant service. Even though certain service ingredients are present, their action comprises the supply of ice cream as a thing (a manufactured commodity) rather than a service, it further said.

Advance ruling authorities seem to have determined that ice cream supplied in ice cream parlors was covered by restaurant services (except when sold in bulk orders) and thus subject to the GST rate of 5% (without input tax credit) in some situations.

Because ice cream parlors sell previously manufactured ice cream, the circular currently states that they do not have the character of a restaurant and, as a result, ice cream will be subject to a GST rate of 18 % (with ITC). While the circular clarifies the GST treatment of ice cream parlors, it may raise questions for other food suppliers who sell pre-packaged foods with only a single service ingredient, he said.

Restaurant service includes the component of cooking or preparing while providing service, whereas ice cream parlors do not engage in any type of cooking at any point. Since ice cream parlors sell previously produced ice cream and do not have the atmosphere of a restaurant, they will be subjected to tax at the same rate as ice cream sold outside, i.e., 18 %.